Arts & Culture of Central Virginia As Explored by The Culture Maven (aka: Mary Burruss)

All Dressed Up and Nowhere to go: A review of ATLANTIS 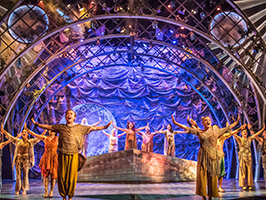 Last spring I traveled to the Sivananda Ashram on Paradise Island in the Bahamas. Among several sacred spots on the 7 acre plot of pristine prime real estate on which the Ashram stands is a temple built around a rock which is supposedly, according to the late Swami Sivananda, is the tip of a spire of an ancient temple of the legendary city of Atlantis which he claimed was sunken underneath the island. Thus the name of the famous resort located right next door to the Ashram.

That tidbit has nothing to do with my review. I just wanted to boast that I have been to the most likely geographic location of the play’s namesake and touched with my own hands the supposed top of that ancient temple.

Anyway, the play, Atlantis, like Paradise Island, is beautiful. A feast of perfectly executed production values in lighting, props, set design and execution,  costumes, make-up, hair (wigs), and sound design. The actors are flawlessly cast, including Broadway worthy leads who are great looking and wonderful singers. Kristen Hanggi’s direction is thoughtful and effective. Anthony Smith’s musical direction is spot on. Kikau Alvaro’s choreography is meaningful and exciting. A beautiful world is created in the script complete with politically correct same sex couples and mixed race families.

Despite all of the production perfection, this show is as hollow as a summer fling at the beach. It feels good in the moment to be with that sun tanned, hot-bodied surfer but it lacks the kind of substance that makes a lasting relationship.

The script is so thin that I did not give one rat’s ass that Atlantis was going to disappear into the ocean or that some of its inhabitants were going down with it. (Oh, Oops! Spoiler Alert.) The Disney-esque feel to it made me nauseated. If I wanted to see a Disney show I would go to one.  Most of the songs sounded the same and seemingly all of them ended in a loud crescendo! which left me thinking, “Enough already!”

Please know- I was entertained.

This play is for Andrew Loyd Webber fans.